"A 3,700-year-old clay tablet has proven that the Babylonians developed trigonometry 1,500 years before the Greeks and were using a sophisticated method of mathematics which could change how we calculate today". Full news article @ The Telegraph
. See also the response by Evelyn Lamb (Thanks Johan Bollen). Collection of letters by Alan Turing found in filing cabinet

"A lost collection of nearly 150 letters from the codebreaker Alan Turing has been uncovered in an old filing cabinet at the University of Manchester. The correspondence, which has not seen the light of day for at least 30 years, contains very little about Turing’s tortured personal life. It does, however, give an intriguing insight into his views on America. In response to an invitation to speak at a conference in the US in April 1953, Turing replied that he would rather not attend: 'I would not like the journey, and I detest America.' The collection focuses mainly on Turing’s academic research, including his work on groundbreaking areas in AI, computing and mathematics, and invitations to lecture at some of America’s best-known universities including the Massachusetts Institute of Technology". Full news article @
The Guardian. 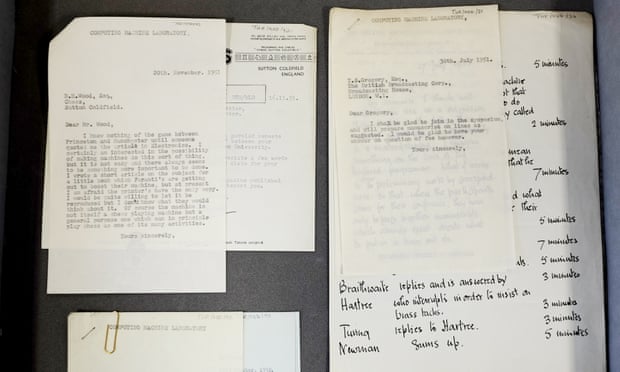 From Bones to Turing and Cybernetics

The Lebombo Bone and Other Ancient Mathematical Objects

BTW, my thoughts on the recent Turing Biopic and a related news article.


"Necessity is the mother of invention, right? Well, not always. Steven Johnson shows us how some of the most transformative ideas and technologies, like the computer, didn't emerge out of necessity at all but instead from the strange delight of play. Share this captivating, illustrated exploration of the history of invention. Turns out, you'll find the future wherever people are having the most fun." Full Video: Steven Johnson: The playful wonderland behind great inventions | TED Talk. Thanks Al Abi-Haidar!

Very cool algorithmic exploration of Borges' Library of Babel submitted by Stephen Sher (thanks!) "The Library of Babel is a place for scholars to do research, for artists and writers to seek inspiration, for anyone with curiosity or a sense of humor to reflect on the weirdness of existence - in short, it’s just like any other library. If completed, it would contain every possible combination of 1,312,000 characters, including lower case letters, space, comma, and period. Thus, it would contain every book that ever has been written, and every book that ever could be - including every play, every song, every scientific paper, every legal decision, every constitution, every piece of scripture, and so on. At present it contains all possible pages of 3200 characters, about 10^4677 books."